blog
You are here: Home1 / blog2 / Spinal Surgery3 / How The Spinal Cord Works 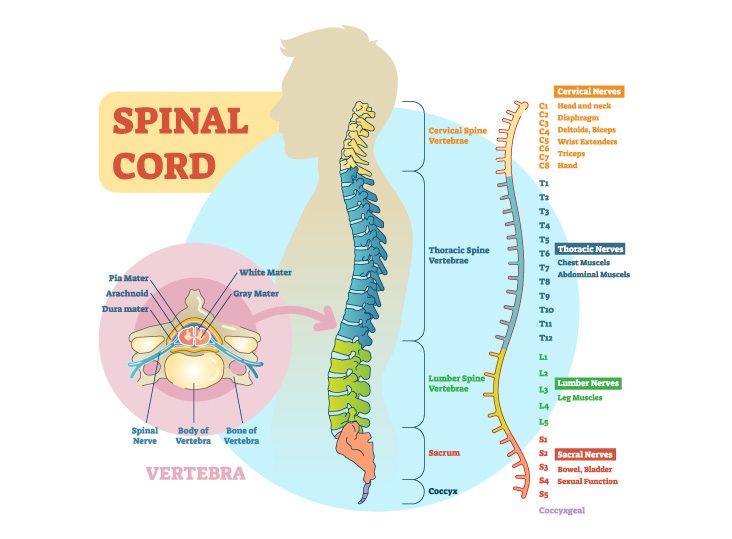 What is the central nervous system?

The central nervous system (CNS) controls most functions of the body and mind. It consists of two parts: the brain and the spinal cord.

The brain is the center of our thoughts, the interpreter of our external environment, and the origin of control over body movement. Like a central computer, it interprets information from our eyes (sight), ears (sound), nose (smell), tongue (taste), and skin (touch), as well as from internal organs such as the stomach.

How does the central nervous system differ from other systems of the body?

Most systems and organs of the body control just one function, but the central nervous system does many jobs at the same time. It controls all voluntary movement, such as speech and walking, and involuntary movements, such as blinking and breathing. It is also the core of our thoughts, perceptions, and emotions.

How does the central nervous system protect itself from injury?

The central nervous system is better protected than any other system or organ in the body. Its main line of defense is the bones of the skull and spinal column, which create a hard physical barrier to injury. A fluid-filled space below the bones, called the syrnix, provides shock absorbance.

Unfortunately, this protection can be a double-edged sword. When an injury to the central nervous system occurs, the soft tissue of the brain and spinal cord swells, causing pressure because of the confined space. The swelling makes the injury worse unless it is rapidly relieved. Fractured bones can lead to further damage and the possibility of infection.

Why can’t the central nervous system repair itself after injury?

Many organs and tissues in the body can recover after injury without intervention. Unfortunately, some cells of the central nervous system are so specialized that they cannot divide and create new cells. As a result, recovery from a brain or spinal cord injury is much more difficult.

Cells of the central nervous system

Neurons connect with one another to send and receive messages in the brain and spinal cord. Many neurons working together are responsible for every decision made, every emotion or sensation felt, and every action taken.

The complexity of the central nervous system is amazing: there are approximately 100 billion neurons in the brain and spinal cord combined. As many as 10,000 different subtypes of neurons have been identified, each specialized to send and receive certain types of information. Each neuron is made up of a cell body, which houses the nucleus. Axons and dendrites form extensions from the cell body.

Astrocytes, a kind of glial cell, are the primary support cells of the brain and spinal cord. They make and secrete proteins called neurotrophic factors. They also break down and remove proteins or chemicals that might be harmful to neurons (for example, glutamate, a neurotransmitter that in excess causes cells to become overexcited and die by a process called excitotoxicity).

Astrocytes aren’t always beneficial: after injury, they divide to make new cells that surround the injury site, forming a glial scar that is a barrier to regenerating axons.

Microglia are immune cells for the brain. After injury, they migrate to the site of injury to help clear away dead and dying cells. They can also produce small molecules called cytokines that trigger cells of the immune system to respond to the injury site. This clean-up process is likely to play an important role in recovery of function following a spinal injury.

Oligodendrocytes are glial cells that produce a fatty substance called myelin which wraps around axons in layers. Axon fibers insulated by myelin can carry electrical messages (also called action potentials) at a speed of 100 meters per second, while fibers without myelin can only carry messages at a speed of one meter per second.

Messages are passed from neuron to neuron through synapses, small gaps between the cells, with the help of chemicals called neurotransmitters. To transmit an action potential message across a synapse, neurotransmitter molecules are released from one neuron (the “pre-synaptic” neuron) across the gap to the next neuron (the “post-synaptic” neuron). The process continues until the message reaches its destination.

There are millions and millions of connections between neurons within the spinal cord alone. These connections are made during development, using positive (neurotrophic factors) and negative (inhibitory proteins) signals to fine-tune them. Amazingly, a single axon can form synapses with as many as 1,000 other neurons.

There is a logical and physical topographical organization to the anatomy of the central nervous system, which is an elaborate web of closely connected neural pathways. This ordered relationship means that different segmental levels of the cord control different things, and injury to a particular part of the cord will have an impact on neighboring parts of the body.

Specialized neurons carry messages from the skin, muscles, joints, and internal organs to the spinal cord about pain, temperature, touch, vibration, and proprioception. These messages are then relayed to the brain along one of two pathways: the spinothalmic tract and the lemniscal pathway. These pathways are in different locations in the spinal cord, so an injury might not affect them in the same way or to the same degree.

Each segment of the spinal cord receives sensory input from a particular region of the body. Scientists have mapped these areas and determined the “receptive” fields for each level of the spinal cord. Neighboring fields overlap each other, so the lines on the diagram are approximate.

Over one million axons travel through the spinal cord, including the longest axons in the central nervous system.

Neurons in the motor cortex, the region of the brain that controls voluntary movement, send their axons through the corticospinal tract to connect with motor neurons in the spinal cord. The spinal motor neurons project out of the cord to the correct muscles via the ventral root. These connections control conscious movements, such as writing and running.

How the spinal cord and muscles work together

The spinal cord is divided into five sections: the cervical, thoracic, lumbar, sacral, and coccygeal regions. The level of injury determines the extent of paralysis and/or loss of sensation. No two injuries are alike.

This diagram illustrates the connections between the major skeletal muscle groups and each level of the spinal cord. A similar organization exists for the spinal control of the internal organs.

How the spinal cord and internal organs work together

In addition to the control of voluntary movement, the central nervous system contains the sympathetic and parasympathetic pathways that control the “fight or flight” response to danger and regulation of bodily functions. These include hormone release, movement of food through the stomach and intestines, and the sensations from and muscular control to all internal organs.

This diagram illustrates these pathways and the level of the spinal cord projecting to each organ.

Although spinal cord injury causes complex damage, a surprising amount of the basic circuitry to control movement and process information can remain intact. This is because the spinal cord is arranged in layers of circuitry. Many of the connections and neuronal cell bodies forming this circuitry above and below the site of injury survive the trauma. An important question to research scientists is, how much do these surviving neurons “know?” Can they regenerate and make new, correct connections?

Research points to a multiplicity of possible interventions to promote recovery from a spinal injury. Some would be delivered immediately following the injury; others are less time-specific and involve rebuilding and reconnecting the injured cord. Clearly, both approaches are important: limiting degeneration will enhance the probability of greater recovery, while stimulating regeneration will build upon the remaining system to restore lost connectivity and perhaps to prevent further degeneration.

The following are some of the intervention strategies supported by funding from the Christopher & Dana Reeve Foundation. This is not a comprehensive list of all possible interventions.

Our mission is to return our patients back to pain-free mobility and full strength as quickly and painlessly as possible using both surgical and non-surgical orthopedic procedures.

Our expert physicians provide leading-edge, comprehensive care in the diagnosis and treatment of orthopedic conditions, including total joint replacement and sports medicine. We apply the latest state-of-the-art techniques in order to return our patients to their active lifestyle.