You are here: Home1 / Derek E. Lamprecht, DO 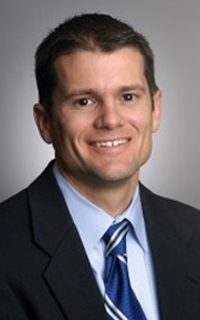 Dr. Lamprecht is a board-certified orthopedic surgeon and has been practicing in Oregon since 2006. He specializes in the care of athletes of all ages, as well as arthroscopic and complex reconstructive surgery for the shoulder and knee.

Dr. Lamprecht received his undergraduate degree from Willamette University in Salem, Oregon where he lettered four years in baseball. He then graduated from Midwestern University, Arizona College of Osteopathic Medicine in 2000. He completed his general rotating internship and orthopedic surgical residency at Botsford General Hospital in Farmington Hills, Michigan from 2000-2005 as part of the Michigan State University program. Following graduation he elected to continue his training in the TRIA Orthopedic Center sports medicine fellowship in Minneapolis, MN. From 2005-2006 he served as the Associate fellow team physician for the Minnesota Vikings(NFL), Twins(MLB), Wild(NHL), Timberwolves(NBA), and Lynx(WNBA), as well as local colleges and high schools.

Thank you Dr. Lamprecht for fixing my shoulders!

Dr. Lamprecht is the best shoulder surgeon in Portland, OR. Would recommend to anyone. Sharp and professional and competent.

I had LABRUM shoulder surgery here , and after years of being told by doctors that the tear in my shoulder wasn’t extensive enough , I fired the last surgeon. ..made an appointment with Dr Derek Lamprecht , unfortunately the wait was a little long , but well worth the wait. After having my medical records transferred to him , his assessment was what I’d been waiting to hear for about 3 yrs, the quality of care you receive at this clinic is absolutely the best you could ever imagine. …the nurses and doctors here are amazing.

Dr Lamprecht was recommended to me by a friend and I could not be happier that I followed that recommendation. He explained everything clearly to me and answered all my questions. I had arthroscopic knee surgery and am very happy with the results. Any staff member I met at his office was extremely friendly and reassuring.

I didn’t choose Dr. Lamprecht because I had an accident and he was on-call. How lucky for me that he was the designated orthopedic surgeon that day. He is thorough, cares about his patients and, most important to me, was incredibly skillful in repairing my old bones. The icing on the cake is his staff who are helpful, reassuring, and highly responsive to his patients. The Dr. and staff all make it seamless from start to finish. I highly recommend Dr. Lamprecht. If you are able to have elective surgery call him, and if it’s an emergency, hope he’s on call!

All three of my hamstring tendons ruptured due to a work injury. The Workman’s Comp doctor kept thinking it was a bad sprain. I got a recommendation to see Dr. Lamprecht. He immediately diagnosed and confirmed through MRI that it was not a sprain but ruptured. He performed surgery to reattach the hamstring tendons folowed by a Compartment Syndrome release of 2 compartments in my leg. I highly recommend him for his expertise, bedside skills and overall care/concern for his patients. I have since recommended others who have gone to him and have had the same experience and good outcomes. I commend the entire office staff as well. Thanks Dr. Lamprecht!

Dr. Lamprecht is amazing! Very understanding and hardworking. He is very much a perfectionist and his stiches look great! He’s performed several surgeries on me and he is always outstanding. His Medical Assistant is great. I’ve also had a patient go to Dr. Lamprecht she loved him as well! Best specialist!

After a shoulder injury didn’t improve, I went to great lengths to research the best doctor in the area. Dr. Lamprecht has proven himself as a caring doctor who takes his time with you to really listen. He gets my vote of trust! I certainly recommend him.

He is a great Ortho doctor. I had a great experience with him and the staff. My surgery went well for my shoulder and I would go back again if needed and would recommend others to his office as well. 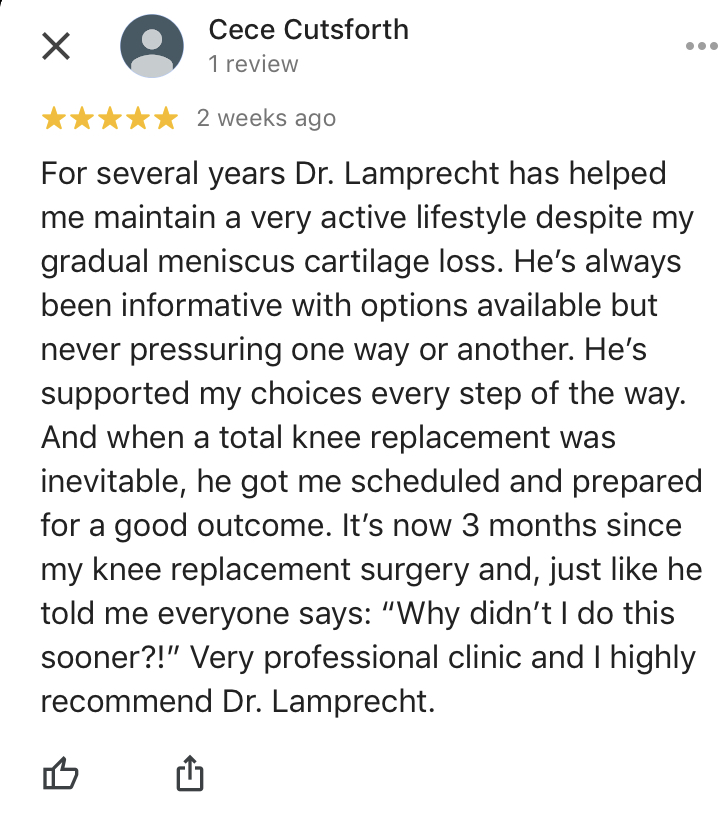